Source: This article was first published in the Tunnelling Journal February/March Edition 2022

We've been building tunnels for thousands of years, and the basics have been the same for a long time. In modern history, tunnel alignments are finalised with input from several disciplines and the ground conditions are typically investigated with a thorough drilling campaign.

Samples from boreholes are collected and materials classified to provide a geological model for the route which is then passed to the designers. This workflow includes uncertainties of what lies between the boreholes which creates geological risk. EMerald Geomodelling is challenging the status quo with a unique three-step process that has already yielded impressive commercial benefits.

A method many years in the making

With roots in the Norwegian Geotechnical Institute (NGI), a small team of geophysicists, geologists, and engineers made big advances in a technique they call ‘geoscanning’ around ten years ago. Using data gathered from airborne electromagnetic (AEM) surveys and correlating those data with existing ground investigations, they were able to provide key insights about the ground conditions early on in a project.

However, interpreting these AEM data was a slow, manual process. A key advancement came in 2017 when they started using artificial neural networks to automate the detection of top of bedrock. In the subsequent years of research and development they have tested and proved many different methods of interpreting resistivity models including automation, isovolume analysis, clustering, and machine learning-based interface detection.

In the last few years, EMerald has expanded massively in size, and are now working on tunnelling projects all over the world. The mainstream acceptance for their solution is not quite there though. Although they have the ability to deliver highly accurate 3D models of ground conditions, the established norm of using extensive drilling campaigns is still what gives most engineers confidence about ground conditions.

The myths about boreholes

The illusion that the use of boreholes is a lower-risk method is perhaps the main reason, although this is slowly fading away. It has been proven over many projects – both scientific and for clients – that it in fact gives less security. Andi A. Pfaffhuber, CEO of EMerald Geomodelling, explains how.

“The simple explanation is that boreholes will only give you information about the exact location you’re drilling at, and you’re missing everything in-between. For tunnels, lack of rock cover at certain locations could be completely missed with a drilling campaign, while a 3D scanning would have uncovered this immediately. The findings from the scans can then be confirmed by strategic drillings, to eliminate any doubt."

“In other words, you’re getting the best of both worlds, with the full-picture view an AEM scan gives combined with the concreteness of boreholes”, he adds.

It’s about more than risk

The complete picture aspect, which gives less uncertainty and risk, is perhaps the main advantage of the methodology EMerald utilizes. There are many other benefits of utilizing geoscanning in tunnelling projects though, which might not be obvious to everyone.

Pfaffhuber continues, “firstly, there’s the cost aspect. Although this methodology might have a bigger entry cost, these expenses are gained back pretty quickly”, he says.

“As many probably know, unforeseen, challenging ground conditions are one of the main reasons why about fifty percent of all tunnelling projects go over budget. In other words, by obtaining information about the ground conditions much more quickly, major budget hiccups can be avoided. Secondly, construction can start earlier, as the ground conditions can be mapped in just weeks. With traditional methods, it would take many months – and in some cases– years.”

“There’s also an environmental aspect to this. The AEM method both has less emissions to start with, and is also far less intrusive in the local environment due to the reduced amount of boreholes. Additionally, construction can be completed much more efficiently when unforeseen conditions are avoided."

In addition to the mentioned benefits, there are locations where traditional borehole investigations are simply not possible to conduct, due to rugged terrain or remote locations. Therefore, the use of airborne electromagnetic scans and 3D modelling enables tunnels to be constructed at places where it previously was fraught with risk.

“We’ve worked on projects in the Himalayas where traditional drilling campaigns are impossible to conduct due to the challenging conditions. I would lie if I said the conditions didn’t create challenges for us as well, but we were still able to conduct the surveys in a safe and effective way. This is creating opportunities for tunnelling construction that previously weren’t even on the list of possibilities", says Pfaffhuber.

The FRE16 project is a joint railway and highway design project, located in a forested area, launched in 2015. The goal is to connect the city of Sandvika, which borders Norway’s capital Oslo, and the city of Hønefoss with 40 km of new rails and roads.

This plan includes a 23-km railway tunnel in the southern half of the project. 655 line-km of AEM data were collected in June 2016. Results from the geophysical surveys indicated that the planned tunnel alignment intersected largely high-resistivity rock. However, the tunnel intersects a major, low-resistivity unit near its northern portal.

Later core drillings confirmed that this resistivity unit coincided with a transition from igneous rocks to sedimentary rocks, as well as a decrease in drilling resistance and a decrease in Rock Quality Designation. This feature persists perpendicular to the alignment of the tunnel, so this unit cannot be avoided by a minor alignment adjustment.

There is another unit of low-resistivity rock that is subparallel to the tunnel alignment. This coincides with a narrow valley at surface, suggesting that this is a fault zone. Fortunately, the proposed alignment does not intersect this unit of low-resistivity material. Therefore, we were able to give information to the contractor who made their choice of alignment much more assuredly.

Recently, airborne geoscanning was employed in two high-elevation road tunnel projects in northern India. The first, 6.5 km-long tunnel is currently being excavated, whereas the second, 14 km-long tunnel is still in the planning and design phase. Geoscanning was undertaken in the first case primarily as a demonstration and verification of the method, whereas in the second case, it was used to support ongoing ground investigations wherein ground-truth data are sparse. At both sites, bedrock consists of low-to medium-grade metamorphic rocks. The Zojila Formation and Panjal Trap Formation occur at both sites, and Agglomerative Slates (slate) are also mapped at the second site. In both cases, the primary application of geoscanning was to map the occurrence of weak, phyllitic rock.

Results of the geoscanning revealed that the central portions of the first tunnel consist of mainly very high-resistivity rock whereas the portal areas contain either medium or low resistivity rock. The low-resistivity zones correlated well with the major shear zones detected near the boundaries between the Zojila and Panjal Trap Formations. The high-resistivity units detected in the central part of the tunnel corresponded with the stronger rocks of the Panjal Trap Formation.

By visualizing rock units alongside the planned second tunnel alignment in 3D, we could see that the alignment appeared to have a suitable horizontal placement, but the vertical alignment warranted adjustment in some segments to avoid a low-resistivity rock unit. This was important in the client’s decision on where to place the tunnels.

In early 2019, planning of a new 19-km stretch of double-lane highway about 30 km northeast of Trondheim, Norway began. In this area, bedrock depth was highly variable, ranging from outcropping at surface to buried below tens of meters of soft clay, posing significant engineering challenges for planning a road alignment. Few boreholes had previously been collected in the area.

Engineers predicted that 600 geotechnical boreholes would have to be drilled to sufficiently reduce the geological uncertainty in the wide corridor, but they chose also to utilize airborne geoscanning in June 2019 before the first major drilling campaign.

Even the first version of the bedrock model, which utilized only the sparse, pre-existing drillings, pointed to two locations where there was a lack of rock cover even though sufficient rock cover had been assumed: Grubbåsen and Fossingelva.

At Grubbåsen, the first geoscanning-based bedrock model was 10 meters deeper than first anticipated and was close to the tunnel ceiling. Engineers thus focused follow-up borehole investigations at this location, and a deep, narrow depression was discovered in the bedrock surface that intersected the tunnel profile. At this location, there was no flexibility to change the tunnel alignment, so the tunnel support design, construction plans and project budgets were revised to account for these challenging ground conditions.

At Fossingelva, rock cover above the planned tunnel location was virtually nil according to the first interpretation of the geophysical data, prompting the planners to move the tunnel some hundreds of meters west and to focus follow-up drillings at the new location. An updated model indicated only 5 meters of rock cover at some sites on this new location, so the tunnel was ultimately repositioned to 50 meter deeper.

Thanks to insights like those at Fossingelva and Grubbåsen,the client made major savings in the project. This included direct cost savings like reducing the number of drillings needed by one third and saving the project at least 3 months of work time by eliminating an infeasible route alternative. The indirect savings were even greater. By avoid constructing a long a less optimal route and identifying and planning for risky zones, geoscanning saved approximately 250 million NOK (~21 million GBP) for the project, according to an estimate by engineers at NGI. 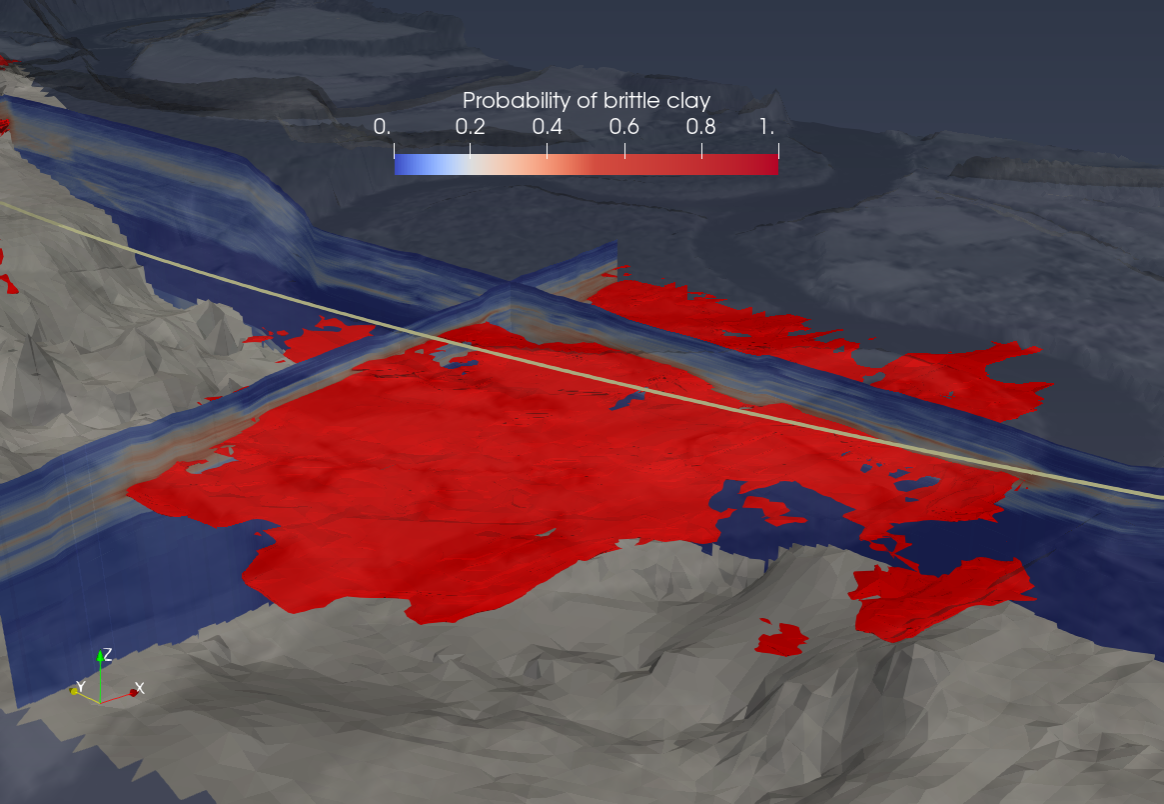 RUMO Logística, the largest railway company in South America, has engaged EMerald Geomodelling in their latest project. By applying our innovative method of bedrock and soil mapping, they’re able to begin the project quicker and with less risk.